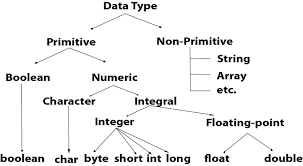 Data types specify the different sizes and values that can be stored in the variable. There are two types of data types in Java langauge
at September 24, 2019 No comments:

First of all, I will give you a simple overview of how a Java program looks like. In the below code, have created a class – MyFirstJavaProgram and printed “Hello World”. Go ahead and try to execute the below example in your Eclipse IDE. Do not worry, we will discuss about Java class in a while.

Let me discuss about each one of them:

Local variable: These are the variables which are declared within the method of a class. Let’s understand this with a programmatic example: